As previously mentioned, Retrospectives integrate well into the natural cadence of an Agile software development approach.  The three typical Retrospective rhythms are conducted at the iteration, release, and project points.  Additionally, a project team might consider conducting a “mini” or incident Retrospective; as an example, the result of a daily standup meeting could warrant an elaborated session of reflection, enriched with the practices that reflect the main themes of a Retrospective.

While the overarching Retrospective format remains consistent among the iteration, release, and project contexts, there is a recommended variance in the amount of allocated time and the number of attendees in each Retrospective type, summarized below:

Establishing the foundation of a Retrospective involves distinct steps and various activities that create and help to sustain a strong spirit of collaboration and learning.  These phases provide structure for the team’s focus and resulting work (figure 1).

Figure 1: Steps of a Retrospective 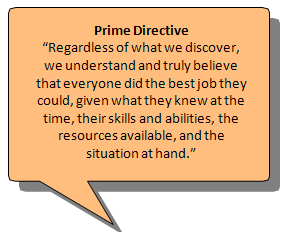 The cross-functional nature of a project team requires that the members feel safe in conducting open communication, expressing their feelings about the progress of the project, presenting ideas for improvement, working in an environment that values collaborative work, and effectively reaching consensus on actions that should be integrated in the ongoing project.

Agile methodologies are designed to highlight the importance (and needed competence) of team collaboration and healthy communication, addressing the non-technical, but fundamental people-related aspects of software development, filling the “feeling” gap overlooked by traditional Iteration and Milestone assessments.  As illustrated, Retrospectives provide a process-oriented means of addressing the common issues related to the sociology of the project team, providing an environment for adaptation and inspection, generating ideas and innovation drivers for process improvement, and conducting a rhythmic measure of the “heartbeat” of the team.  In the words of one Agile evangelist:  “If you are not holding retrospectives on your Agile software projects, you are not doing Agile projects!” [3]

Story Point Estimation: Could Your Team Do Better?