I sit somewhere in the middle. I own an HTC Vive and it is pretty dang awesome. The experience is not perfect, of course, but with interest growing and prices coming down, it’s just going to get better.

One expression of VR’s growing popularity is that Unity3D supports VR programming. And, with the free VRTK (Virtual Reality Tool Kit) framework, it’s becoming much easier to get started programming for VR. VRTK implements many basic components, such as:

Working on a fun little side project, I noticed one implementation it did not have: a virtual reality bomb. So, I set upon to create one myself. This post details the process I went through for creating a timed, throwable, explosive object for virtual reality using Unity3D & VRTK. I include highly-commented code samples at the end of this tutorial.

A caveat…unlike many tutorials I see online, I’m going to skip what I assume are some basic knowledge requirements, such as what Unity3D is and how to navigate it and its store interface. It’s pretty easy to educate yourself on this elsewhere and it’s actually pretty intuitive.

So, given that you have already installed or know how to install at least the free version of Unity3D, start a new 3D project.

At the very least, import the VRTK from the Unity Store, and the VR headset API (in my case, SteamVR), if applicable. Otherwise, VRTK implements a “fake” VR view to test your changes (basically a standard flat screen FPS view). VRTK will prompt you on import to keep a bunch of default settings; yes, keep them all.

There are a few pieces of existing functionality we need: grabbing an object and using an object. I used project 008_Controller_UsingAGrabbedObject as my base, as it contains exactly what we need and little else.

First thing we want to do is to get rid of all unnecessary objects in the scene. In the Hierarchy view, under ExampleWorldObjects, delete the Gun object and every thing under and including the TypeTests object.

As opposed to instructing the code in the Bomb.cs script line by line, I have instead included a highly commented version of it at the end of this article. Also, go ahead and add an empty game object to the scene and name it Wall. We’ll need this later when we create something for the bomb to blow up. I’m including it now so we can just be done with editing the hierarchy. 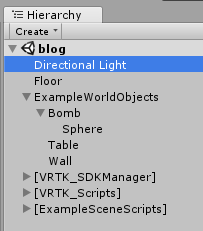 We will need to create an explosion Particle System to visually represent the explosion by following the instructions here. Note that this page describes using fire add image, which does not appear to exist. I used a particle called Firecloud instead. You will need to be sure to also uncheck Play on Awake and Looping in the Inspector view for the ParticleSystem.

Once you are satisfied with the way the particle looks, drag it from the Scene view into the Prefab folder in Project view. This converts the particle into a prefab, so that we can instantiate it on-demand via script. Once the prefab is created, delete the instance you created in the Scene view. The Bomb.cs script will have an explosion attribute you can see in the Inspector view. Select the explosion prefab you created and drop it onto the associated empty field. 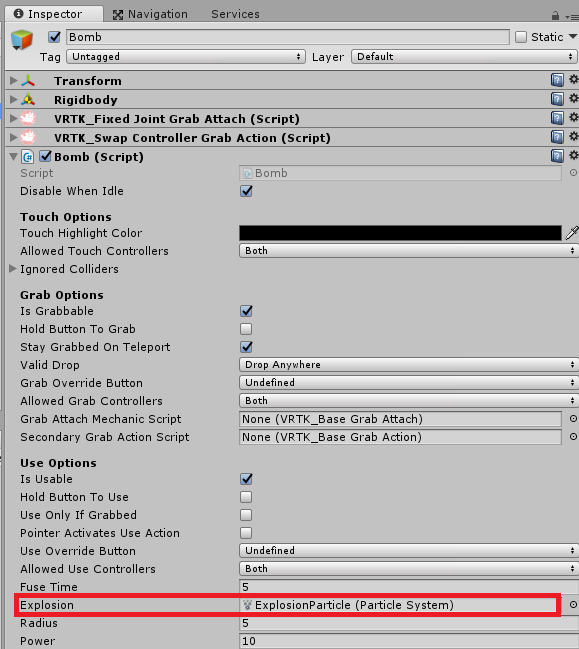 We will also need an explosion sound. Add an Audio Source component to the Bomb object. Drop the attached audio file (included in the download) onto the AudioClip attribute. Ensure both Play on Awake and Is Looping are unchecked.

A few items of clean up. Ensure that on the Bomb.cs script attached to the Bomb object, that Is Useable and Is Grabbable are both checked. I have both Hold button to grab and Hold button to use unchecked, but that is up to personal preference. The effect of each should be fairly evident; the actions are toggled when these are unchecked.

An explosion wouldn’t be much fun without something to blow up. In this case, I’m not talking about damage, just a concussion effect on physical objects; makes the explosion a little more exciting.

Let’s create a wall of blocks to blow up. Drop the attached InstantiateWall.cs (included in the download) into the scripts folder (as before, I didn’t go line by line, but provide the commented source below). Drop this script onto the empty game object Wall we created earlier.

We will also need to go the the Tags and Layers view and add a new tag called Wall. This is to ensure that when the explosion force is determining which game objects to affect, it only affects the wall blocks (and not the floor, etc). Tagging objects is good practice for organization as well.

A few notes about the Bomb.cs code. The isActivated attribute was added since clicking on the use button calls the StartUsing method, but the responsibility of updating the object is in the Update method. A state needed to be set to communicate between the two methods, and isActivated accomplishes this.

And since we did not want to call the explosion immediately upon use, we check this status and use the Invoke method, which waits a length of time defined by its second parameter before calling the method defined by its first parameter.

Quick look at the InstantiateWall script. Basically it just creates a set of cubes with RigidBody components, which are need to exert physical force on. Note we also set each cube with the tag value Wall. Both the RigidBody and tag are needed for our explosion code to affect the cubes.

Now it’s ready to go. Run your program (and slap on your headset if you have one).

Pick up the bomb (ball) and use it. Five seconds later it should explode. Toss it at the wall before that happens for the most spectacular effect. Here’s what you should see:

This is, of course, just a rudimentary implementation of a bomb. This example could be improved in several ways, like:

Here’s a link to the Project Resources.