If we try to pass our greet function parameters of the incorrect type, TypeScript won’t compile:

In my honest opinion, the greatest strength of TypeScript is its introduction of classic OO constructs like classes and inheritance. Granted, these sorts of things can be done in JavaScript’s prototypical system (see David Pitt’s blog post on the subject), but it tends to be more verbose, a bit confusing and far from elegant. In fact, it is so unwieldy that some popular libraries such as MooTools and Backbone provide their own OO abstractions to shield the common developer from the gritty realities of prototypical inheritance.

TypeScript provides the kind of OO goodies that developers over the past twenty years have come to expect. This can be very useful in helping ease developers coming from a conventional OO background into the wild and wonderful world of JavaScript and prototypical inheritance. Look at the following example of a simple class:

This compiles to the following JavaScript:

Here we can see that although TypeScript appears to follow a more traditional OOP paradigm, under the covers all it really does is add some syntactic sugar to JavaScript’s basic prototypical inheritance model.

Let’s look at a simple example of one of the most useful of all OO paradigms (and my personal favorite) – Inheritance.

Pretty cool! I won’t show you what this compiles to here (it’s ugly), but if you’re curious, copy this into Microsoft’s online TypeScript Playground to get a better feel for how TypeScript compilation works.

Although TypeScript allows you to use static typing, at any point in development you are free to fall back to writing vanilla JavaScript. For instance, our original greet method example from earlier could have been written in plain JS:

TypeScript provides built-in support for CommonJS and AMD modules. It is quite simple to import and export TypeScript files, just like you would in a server-side language. Importing JavaScript libraries is a bit trickier, but can still be done. I will cover more on this in a later blog post dedicated to the topic, so stay tuned!

As far as support goes with other IDEs, the current landscape is a bit sparse. WebStorm (my personal favorite web IDE, created by the people who brought you IntelliJ) has support coming in version 6, currently only available in the Early Access Program. There does not seem to be a solid Eclipse plugin yet. There appear to be some offerings available for Sublime Text, emacs and vim.

At the moment, the clear frontrunner – as you might expect – is Visual Studio. Let’s look at what it has to offer.

You can create a new TypeScript project by selecting “HTML Application with TypeScript.” 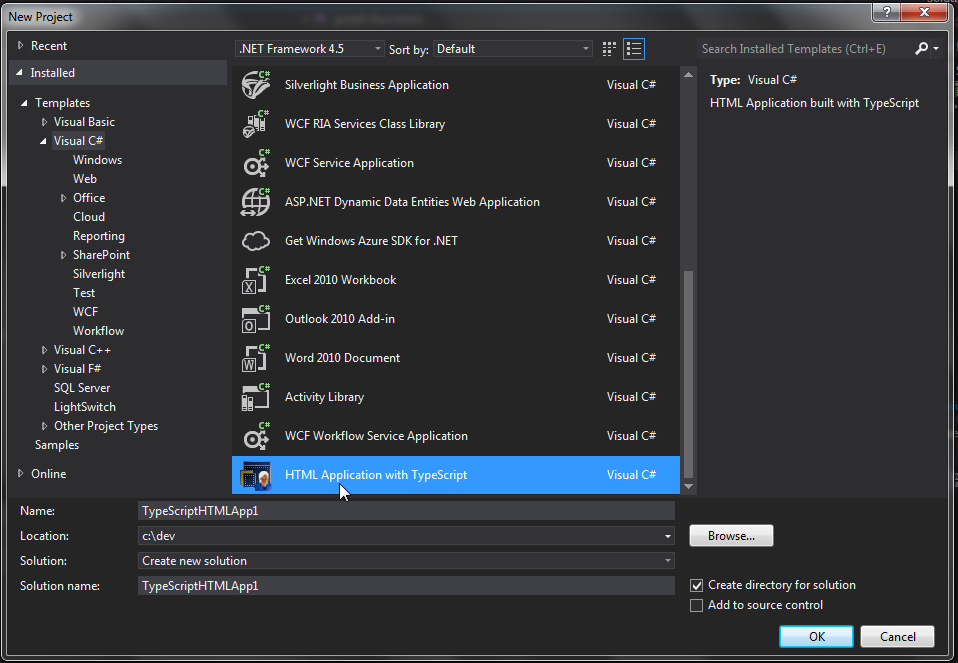 This creates a basic project that includes a default.html that loads app.js, the compiled result of app.ts, the main TypeScript file: 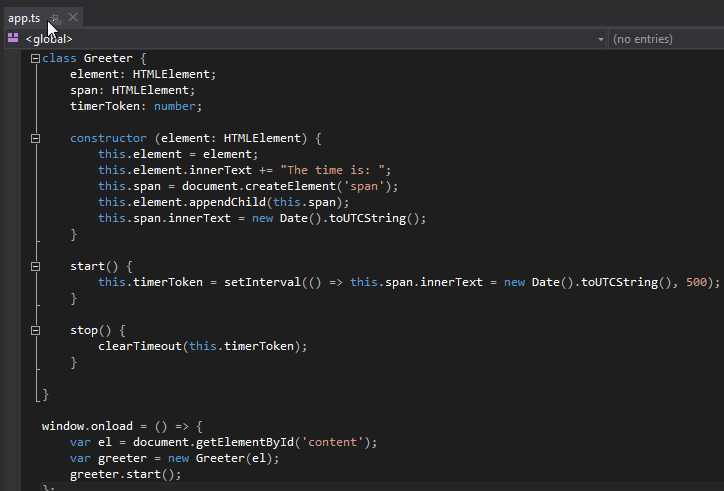 Building our solution uses the TypeScript compiler to generate an app.js output file. To run, we can select what browser we want to use. Like any level-headed developer, I choose Chrome. 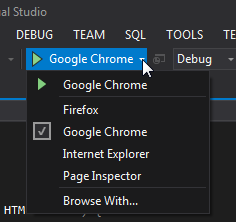 Selecting this option opens up a new tab in Chrome running our app:

We have two options to debug in Chrome developer tools: debug the compiled JavaScript output, or use source maps to debug our TypeScript files. The first option is simple enough – we just open our developer tools, open up app.js and start setting breakpoints.

Source maps are a bit different. If you’re not familiar with the concept, you can read about it here. Basically, source maps map the compiled, possibly minified code that the browser sees onto the actual source code you wrote, with all its syntactic niceties. This, of course, makes debugging much easier. In TypeScript, adding the -sourcemap switch on compilation generates sourcemap information in the compiled output. Visual Studio adds this option by default, so we don’t have to worry about it here. 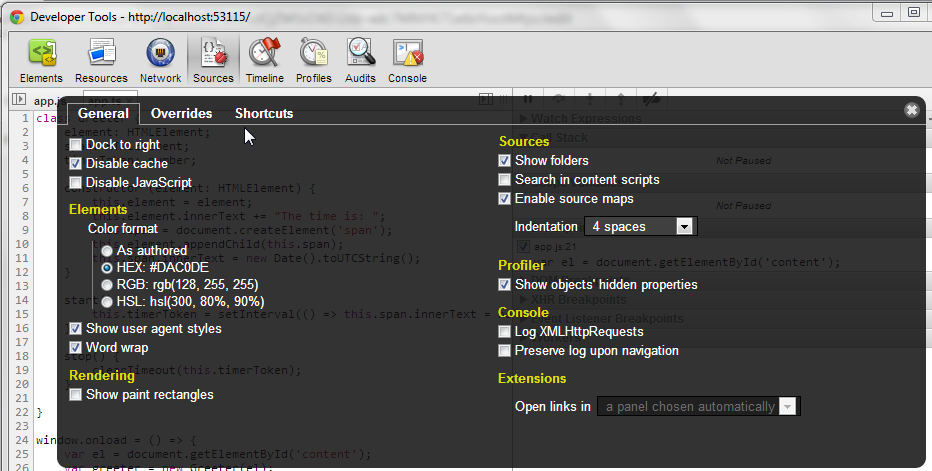 This gives us the option to load app.ts and view our TypeScript code:

See Also:  Bringing a Microservice Into an AWS App Mesh 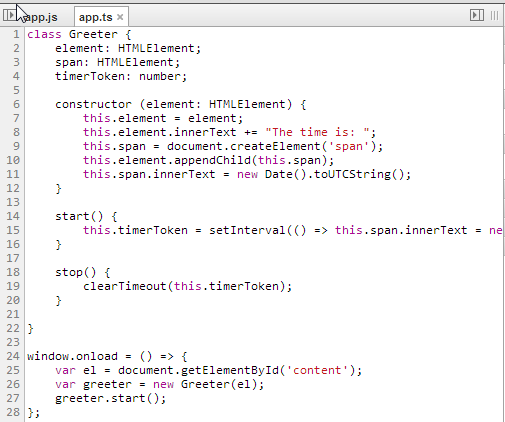 One of the biggest benefits that comes with using TypeScript is the ability to use powerful IntelliSense. With plain JavaScript’s dynamic typing, it is quite difficult for IDEs to offer safe, clean and reliable IntelliSense capabilities (WebStorm does it the best, in my opinion). With TypeScript, you can rely on such useful operations as Renaming a method or class. This is something very hit-or-miss in pure JS, and will be a great boon when developing large-scale applications. 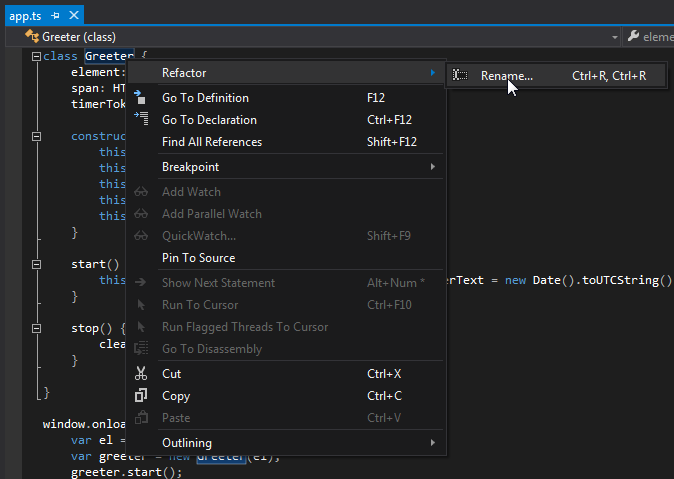 What to make of TypeScript? The reaction to TypeScript’s release has ranged from dismissive to enthusiastic. Naturally, opponents of static typing dismiss it as an unholy pollution of JavaScript’s type-agnostic purity, whereas fans of compiled languages have great praise for it. Those who are critical of Object Orientation generally will not be impressed, while adherents will be excited to finally have OO available to them in the browser.

My take: it depends on you and your use case.

If you are working on a simple, lightweight web application with no more than a handful of developers, the overhead of compilation and learning new language features will probably not be worth the cost in flexibility and speed of development. You won’t like it.

If, on the other hand, you are working on a large-scale Enterprise application with multiple teams and dozens of developers, TypeScript could very well be the tool that makes a JavaScript-based application feasible. There is a certain degree of safety and stability to be found in static typing, and OO certainly helps prevent repetitive coding tasks. If your developers are all JavaScript gurus with years of experience on the client, you probably don’t need TypeScript. If you have a gaggle of Java/C# guys, TypeScript could be huge for you.

So should you invest in TypeScript? Again, it depends on your team and your project.

I’ll add a final caveat – TypeScript is very new right now. It could be a big risk for an organization to take a leap with TypeScript this early in the game. It certainly helps that a giant like Microsoft is behind it, but it remains to be seen if TypeScript will be a long-lived platform. I would certainly advise caution at this point.

In my next post, I will be examining TypeScript’s modularization techniques and how existing JavaScript libraries can be leveraged, so stay tuned!

Go With A Vue

Topics We Write About

What Do You Think? Cancel reply